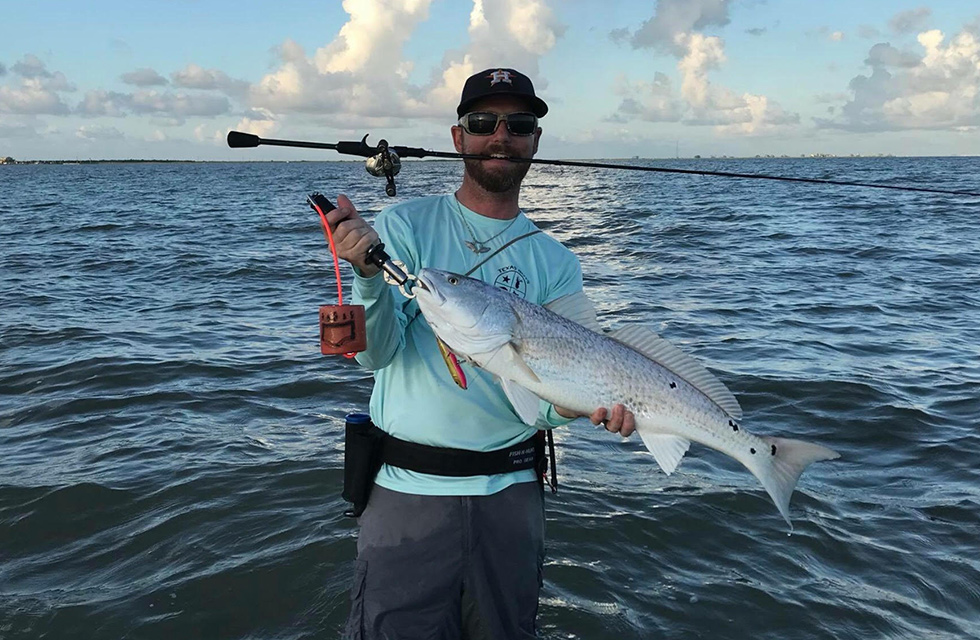 Don’t be scared to try new tactic’s——— One of the biggest things I have learned when fishing with guys that are ages above my skill level is to shut up, listen, watch and soak it all in. The eight year’s that I have been fishing the Galveston Bay complex consistently a lot has changed in the way I fish and how I fish. I started out live bait fishing Galveston Bay near San Luis pass when I was 6-7 year’s old. My uncle had this belly boat that he would drag me around in while he was wading and I can still remember screaming at him when I saw a mullet jump. When I got out of the Military in 2012 I picked up live bait fishing again for about a year and did fairly well but I felt like I was missing out big time. I went and got a job at a well-known tackle shop and tried to surround myself with hardware fisherman.

I had the privilege of meeting a man named Mike Comer one day I was working at the tackle shop and we discussed lures for a good while and what was working for him. We exchanged numbers and the next week I was sitting in his 22’ majek extreme about to wade fish. He told me to tie on a topwater which at the time I had no such thing in my tackle box. He grinned and handed me a few. We jumped out the boat and I shadowed him for the next couple hour’s. I sat there and watched him work that lure so I just started mimicking what he was doing. I was watching cadence and how fast he was reeling it in while asking him what he was looking for and why. I asked him why we were fishing this flat and what was going under the water to make these fish be here. He went on and on while I threw patiently waiting for my turn to hopefully catch something on a topwater. He went on to explain how the tide moves across this flat unto a point and how the fish like to stack up here because it’s more or less a choke point for bait. I threw cast after cast while watching Mike get blow up after blow up it was very discouraging. I also knew that I had to put in my time and couldn’t expect to just wreak havoc on my first outing throwing topwater’s. Halfway into the day after mike already has a limit of red’s on his stringer, I get my first big blow up and I’m hooked up. It’s definitely a feeling you never forget I haven’t that’s for sure. I reeled that fish in and landed him in my net I was HOOKED at that moment I was like I’m never gonna throw another lure ever. Looking back at that I’m glad I didn’t go that route.  What I’m getting at with all of this and I see this a lot with the Veteran’s I take out fishing.

They are stuck in their way’s and comfort zone of lure’s. I understand everyone has that confidence bait but if you don’t broaden your horizons with different lure’s that work different parts of the water column your fishing knowledge will stay stagnant and some days you won’t do so well.

Hope all is well and keep on casting!